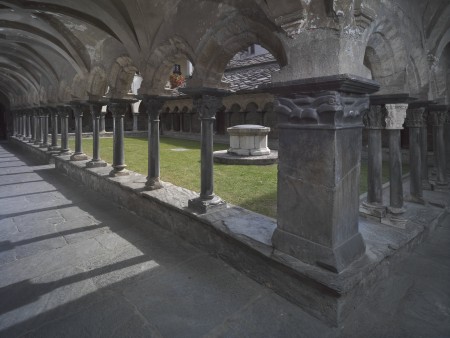 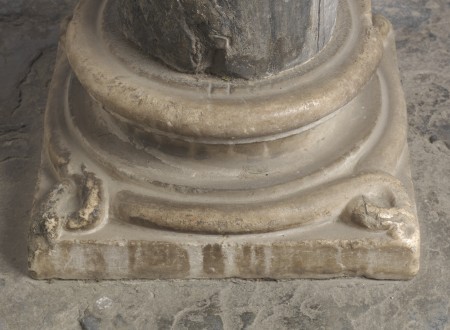 The Cloister of Sant’Orso in Aosta

The collegiate church in Aosta is constructed over the gravesite of its founder, Saint Ursus, and is dedicated to him along with Peter the Apostle. Dates concerning his birth in the Valle d’Aosta cannot be positively ascertained, while his death occurred either on February 1, 529 or much later, in the 7th or 8th centuries.

Archaeological research and excavations carried out in 1972 in the area of both Santi Piero e Orso and the church of San Lorenzo reveal different periods of building activity: A Roman necropolis, over which rose a simple Early Christian structure with a 5th-century apse, contains numerous tombs and wall foundations, which are located primarily in the north-eastern section of the main nave and side aisle of the present church of Sant’Orso.

The expansion of the church dates to Carolingian times and this can be reconstructed from excavations of the enclosing walls. The three-aisled church with staggered apses of the current structure corresponds almost entirely to the Romanesque church, which was begun under Bishop Anselmo (994-1025). Towards the end of the 11th or the beginning of the 12th century the crypt of the church also underwent further alterations. Monastic life at the site officially began under the first Bishop Aribertus (1132-1139), when the chapter was reformed and converted from a collegiate foundation into a community of Augustinian canons regular by Pope Innocent II in 1133 – in modern dating 1132 – and confirmed by an inscription on one of the decorated capitals in the south wing of the cloister. The inscription refers to this event and further esearch has led some to date the cloister capitals to this period. Primarily on the basis of stylistic considerations and its affinity to French cloisters, such as those in Arles, Avignon, and Provençe, on the one hand, as well as Lombard capital sculpture and re-used capitals from the baptistery of Saint-Marine d’Ainay, on the other, this controversial early dating is still in dispute. As a consequence, a date after the middle of the 12th century has been proposed for the capitals, which fell within the time of Aribertus’ successor, Prior Arnolfo di Avise (1149-1159).
Subsequent alterations to the cloister were concentrated primarily in the 19th century and include several columns, bases, and capitals, whose position-marks testify to the reconstruction work probably carried out at this time.

Joined to the south side of the church, the cloister with a length of 19.5 m forms a rectangular enclosure and corresponds, except
for one bay, to the side aisle of the church. The width of the north-south axis measures 10.7 m so that there are necessarily fewer columns on its two sides.