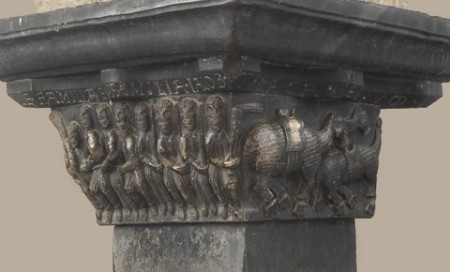 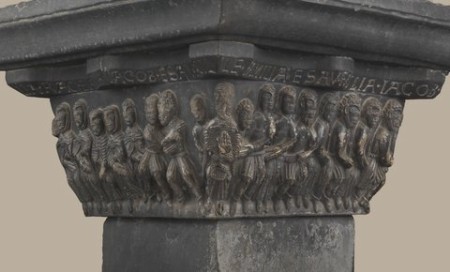 The cloister of Sant’Orso in Aosta belongs, along with the cloisters in Monreale and Cefalù, to the few cloisters in Italy that display such an extensive capital programme with narrative and figural representations in comparison to the surviving examples in France or Spain. Not only topographically, but also in chronological respects can Aosta be studied as a connecting link between southern French and Sicilian capital sculpture, though without implying that there is any necessary stylistic development involved.

Imaging Plan and Reproduction of the Capitals
All capitals were photographed from four sides (north, south, west, east). 26 capitals were photographed from eight sides (N, S, W, E, NW, NE, SE, SW).The symbols N, S, W, E stand for the directions north, south, west, east.
The images were sequentially ordered according to the numbering of Berton 1954 and Barberi 1988.
E.g., N11B12N:
N11 is the number by the side of each gallery of the cloister.

B12 is the number in Berton 1954 and Barberi 1988, who numbered the capitals in order of their arrangement from 1-37. N stands for the side (north) from which the capital was photographed. If it had been photographed from the south, for example, the number would be N1112S.