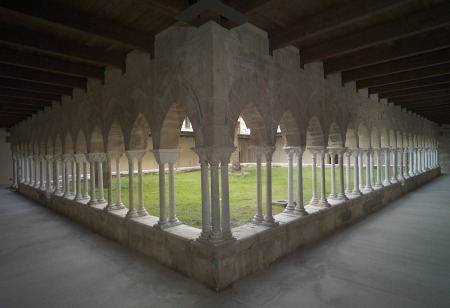 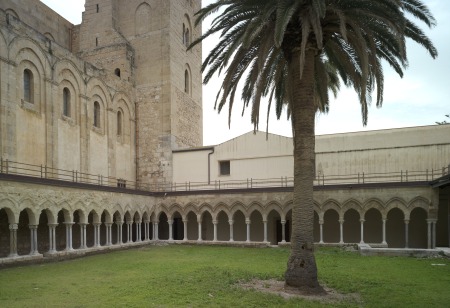 The Cloister of San Salvatore in Cefalù

The cathedral in Cefalù is one of the most outstanding buildings in Norman Sicily. It is also an important precedent for Romanesque architecture and the art of mosaic, and not only in Southern Italy.
It owes its foundation to Roger II, Count and Duke of Apulia, Calabria and Sicily, whom the Anti-Pope Anaclete II had raised as the first King of Sicily in 1130. He was crowned in Palermo on 25 December. Shortly after, on Pentecost in the following year, he laid the foundation stone of the church of his newly founded bishopric of Cefalù.
Dedicated to the Holy Saviour and the Apostles Peter and Paul, the cathedral with its convent was an ambitious building project of the Norman ruler and a tangible sign of his claims to power. It was also intended to serve as his funerary church and that of his family. Roger II, however, when he died in 1154, was not buried in Cefalú but in Palermo instead, contrary to his original wish. This might have something to do with the fact that Cefalù had not been completed at the time of his death. Nor presumably had it yet been consecrated; only the year 1267 is transmitted as the date of its consecration.
There is documentary evidence to show, however, that the king ordered two porphyry sarcophagi to be installed in the choir of the church for himself and his consort in 1145, thus testifying to his wish to give precedence to Cefalù, rather than to Palermo, as his funerary church. A mosaic inscription in the apse of the dome cites, alongside the name of the founder Roger II, also the date 1148 as the year in which the mosaics were completed. This, together with the reported installation of the sarcophagi, provides us at least with an approximate date for the completion of the east end of the cathedral.
That the church was simultaneously begun at the east and west ends, a common building practice at the time, has not been disputed in the scholarly literature. The assumption is further corroborated by the fact that the nave itself was only built later, and clearly differs in height from the east and west sides; it was completed in a more modest form after a change in plan, after the death of Roger II and under the regency of his son William I.
In the older literature the year 1166 – the year of the death of King William I, which coincided with the first year in office of Bishop Boso of Cefalù – is regarded not only as the date for the completion of the nave, but also as an indication for the dating of the cloister, which was situated to the south between the transept and the west tower, flanking to the nave. This date however was later disputed, not least on stylistic grounds; it was argued that the cloister should rather be dated to the 1170s and hence in chronological proximity to the cloister of Monreale.
Just as problematic as the dating of the cloister is a reconstruction of its medieval form and the arrangement of its capitals, since many alterations to it have been made over the centuries, especially in the sixteenth century. Bishop Ottaviano Preconio is thus known to have lowered the ground on the south side of the cathedral and erected a chapter house and two chapels there in 1580. To this end, the cloister was dismantled, with the result that there is now a c. 3.40 m difference in height between the floor level of the nave and that of the cloister. Shortly after the cloister was re-erected, but it is presumable that some alterations were made to its form at this time; not least the transformation of its ground plan from a square to a rectangular form. Lastly, a fire destroyed the east wing of the cloister in 1809.