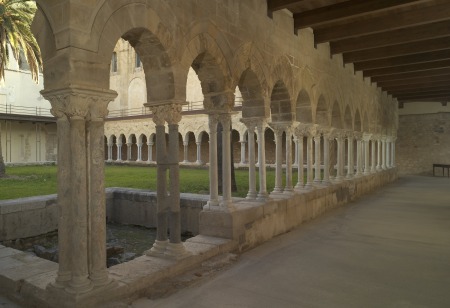 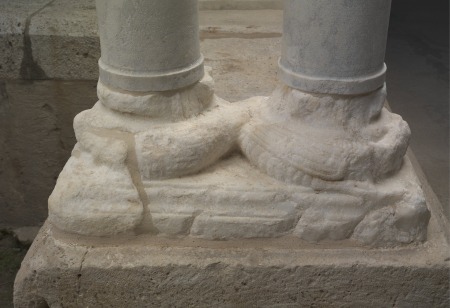 Following the adoption in 1902 of the law on the protection and conservation of Italian monuments (Per la conservazione dei monumenti e degli oggetti d’antichità e d’arte), an ambitious programme comprehensively to restore the cathedral and cloister of Cefalù was inaugurated in 1905. The restoration was prompted by the condition of the cloister at this time, especially its column bases, shafts and capitals. This was giving rise to particular concern, since serious damage was being caused to its marble and the masonry of its walls by the high concentration of marine salt contained as aerosol in the air. The photographs contained in Giulio Arata’s folio volume published in 1914 clearly show the extensive corrosion in the capitals and walls above the arcade of the north side. By contrast, the visible part of the west side, restoration of which had already begun in 1905, is in a far better condition.
The north ambulatory of the cloister was finally dismantled in 1952; its capitals, shafts and bases have since been kept in a storeroom within the cathedral complex.
The south side of the rectangular cloister extends parallel to the nave, and now consists of 20 arcades for a total length of 36 m. The west ambulatory, by contrast, is only 29 m long and is now divided into 15 arcades. The twin colonnettes of the cloister rest on a c. 60 cm high plinth, its line broken, and its height lowered, at the centre of both sides, to enable the inner garden-court to be entered. A fountain-house is situated in the north-west corner, which is marked in a similar way as that in Monreale by four bundled colonnettes in the corner, flanked by two paired colonnettes. The plinth on which the other columns rest is here reduced in height to a low socle consisting of a single masonry course, and the columns flanking the well have a correspondingly higher shaft in order to provide access to it.
Not all the arcades are supported on twelfth-century capitals: of the altogether 33 double capitals originally planned only 28 are medieval in date. The missing capitals have instead been replaced by plain modern bell-capitals. The three corner shafts, each consisting of four bundled columns, joined together by a quadruple capital, on the other hand, are Norman in date, except for a partial integration in the south-east corner of the cloister.
The similarities with the cloister in Monreale are striking, for in Cefalù too the arcades are supported on twin columns, connected by a double base placed over a shared plinth and topped by monolithic marble double capitals. The paired capitals, that is, are carved from a single block and also joined together by a single projecting impost block below the springing of the arch. Just as in Monreale, the lower part of the capital is in many cases surrounded by a frill-like ring of acanthus-leaves with caulicoli rising over them. The basic form of the capital hardly varies at all and can be traced back in the form of an inverted cone with corinthian decorative forms. Only two of the double capitals visible in the cloister today are historiated, while nine are of a figurative genre.
Despite the similarities, there are a few distinctive features that differentiate the decoration of the cloister of Cefalù from that in Monreale. For example, reptiles are coiled round the base of the paired shafts of the west ambulatory close to the fountain-house in a similar way as in some of the bases that can be observed in the south wing of the cloister of Santo Domingo de Silos in Spain, or the colonnettes were supported on lions, as shown in the drawings of 1838 (Domenico Lo Faso Pietrasanta, Duca di Serradifalco: Del duomo di Monreale e di altre chiese siculo normanne, ragionamenti tre, Palermo 1838, Pl. 22).