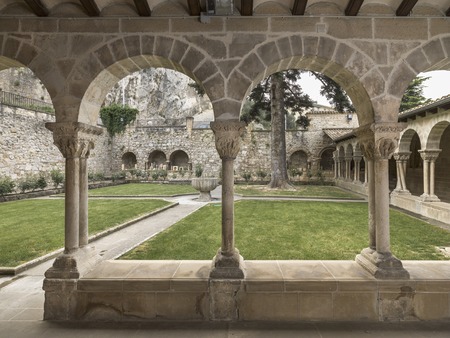 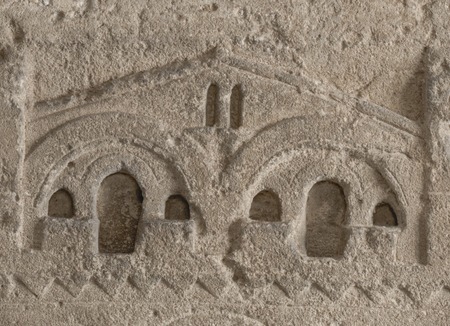 Situated on steep slopes of a hill in the medieval city of Estella (Navarre), the church of San Pedro de la Rúa lies directly on the Pilgrims’ Way of St. James and forms part of one of the most interesting Spanish monastic complexes of the second half of the 12th century. Of its medieval cloister only two wings (north and west sides) with a total of 19 capitals have survived. Two further capitals are preserved in a tomb in the south apse of the church and one in a funerary niche in the west wing. Only seven of the capitals present narrative scenes, but they are of outstanding quality. They also testify to an advanced stage of intellectual reflection. The main thematic focal points of the surviving sculptural decoration consist of scenes of martyrdom and figurative and foliated motifs (animals, mythical beasts, plants). But the iconography of the decorative ensemble as a whole is obscured by the damage caused by the blowing up of the nearby castle in 1572, as a result of which half of the capitals have not survived.
The town of Estella was founded by King Sancho Ramírez (1076-1094) in 1090, not only to offer protection to pilgrims on the Way to Santiago de Compostela, but also to erect a bastion against the continuing Muslim occupation of Spain. The medieval town centre, the inns and hospitals grew in tandem with the expansion of trade, so that Estella developed into one of the most important stations on the Way of St. James. In the twelfth century Estella was governed by the Azagra family on behalf of King Sancho Ramirez; the same family also had close links with Tudela.
Little was hitherto known of the building history of this Romanesque church, which was finished in the gothic style and declared a cultural monument in 1931. Excavations in 2010 showed, however, that its site had hitherto been occupied by a primitive single-aisle church, which was built between 1090 and 1140 (Muñoz/López de Guerreño, 2012). The written sources of 1174 and 1179 and a study of the fabric of the building permit a dating of the existing church to the period between 1160 and 1180, a period that falls in the reign of King Sancho VI, called the Wise (1150-1193).

Architecture
A broad and long flight of steps leads over the uneven terrain up to the north portal of the church of San Pedro de la Rúa. This was the original late-Romanesque portal, with splayed jambs and some gothic features. It was erected next to the bell-tower in the second half of the 13th century. In the second half of the 12th century the choir of the pre-existing building was enlarged with three high apses on various levels, of which the central apse was later transformed with three apsidal chapels built into the wall. This peculiarity was imported into Navarre from the southern regions of France; documents show that some inhabitants of Estella came from these areas.
The impressive size and image of the three-aisled church (without transepts) no doubt reflect the fact that Estella was one of the most important cities in the kingdom of Navarre (only surpassed by Pamplona and Tudela) in the Middle Ages. It was finally raised into the parish church of the town in 1256.

Cloister
The cloister abuts onto the south side of the church. Its irregular, slightly trapezoidal shape was determined by the unevenness of the terrain. It is one of the few Romanesque parish churches in the Iberian peninsula. The cloister too reflects this function.