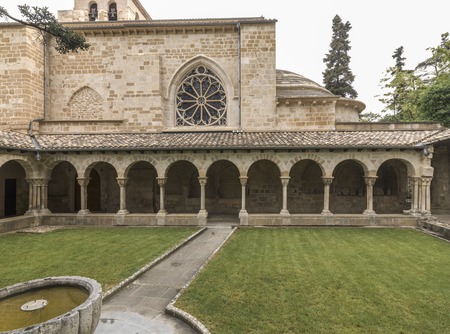 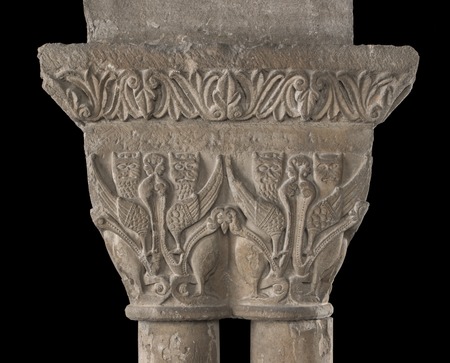 The series of arched recesses for tombs set into the perimeter walls and the lack of cloistered rooms make this clear, as also does the iconographic programme of the capitals.
The cloister had fallen into ruin by the 19th century, and many buildings had begun to encroach on it. A programme of restoration was conducted in 1940, during which the perimeter wall of the two demolished wings of the cloister was reconstructed. But it was not until 1960 that more extensive restorations were undertaken. Especially the restorations in the 1970s and more recent conservational measures have yielded most information. Not least due to the repairs undertaken after the destruction of the castle in 1572 it is improbable that the sequence and layout of the capitals still corresponds to their original order. Each of the two surviving sides of the cloister comprises nine arcades with semicircular arches and capitals resting on paired colonnettes. At the corners the round supports are multiplied and assembled round a bundled pillar (five on the north-east corner and eight on the north-west corner). The regular sequence of colonnettes is only interrupted by an entrance into the garden on the west side, where four colonnettes are bent and twisted together: an idiosyncratic feature that has few parallels, e.g. in Silos, Osma, La Vid or Caracena.

Pictorial language and iconography
The capitals of the north wing, situated closest to the church, show hagiographic scenes such as the martyrdoms of Saints Lawrence, Andrew and Peter, as well as episodes from the childhood, passion and resurrection of Christ. By contrast, on the west side, a quite different (allegorical) programme is presented with animals or fantastic creatures (lions, birds, harpies) and a rich variety of plant motifs. The capitals of the north wing, furthermore, are furnished with some upper inscriptions that identify the individual scenes and figures. Their palaeographical features, suggesting a period of creation in the second half of the 12th century, can in particular be dated to the decade 1160-1170. This kind of close relation between text and image is also a peculiarity of Spanish Romanesque cloisters. But in spite of the inscriptions, the episodes represented are often complex and not easy to decipher. Above all they should also be read in the light of the other sides of the same capitals or even adjacent capitals. The pictorial means used in these narrative scenes are varied, but the narrative modes often very similar.
Since there is no apparent sequence for ‘reading’ the capitals and their present arrangement is in any case contested, it is presumable that – as in Tudela – the sequence would have begun with the capitals carved with episodes from the life of Christ on the north side. The original portal (the present access to the cloister was laid out in the 20th century) was no doubt situated in the middle of this wing, so that the person entering the cloister would be immediately confronted with the three capitals with stories from the life of Christ (N04FL04, N03FL03, N02FL02). Following the sequence of the capitals eastwards, the biblical stories could then be ‘read’ in chronological order.
The sequence of allegorical and hagiographical motifs by which the christological themes are interrupted begins in the middle of the north gallery, proceeding westwards. In capital N05FL05 sin is represented in terms of combat and confrontation. It is followed by a capital in which scenes from the life of Saint Lawrence are represented. It is followed in turn by two capitals dedicated to Saint Andrew.