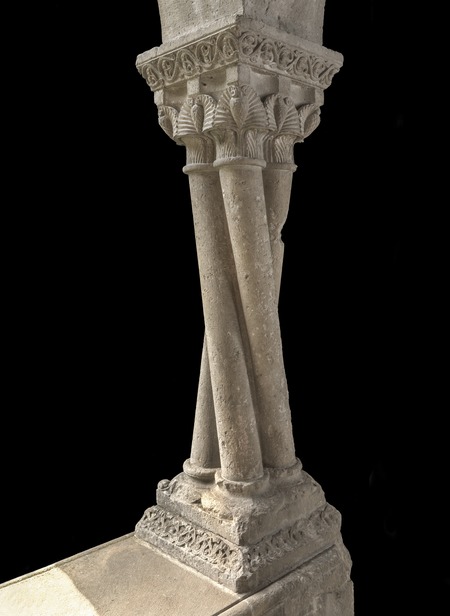 The last capital of the north wing shows Saint Peter, but the scene of his martyrdom is lacking. It can be inferred from this, that a second capital – similar to the two capitals devoted to Andrew – would have originally existed, including the scene of his crucifixion. The fact that this capital is missing further implies that the present sequence of capitals is not the original.
Few parallels to these representations can be found among the Romanesque cloisters of Spain. Although several forms of expression can be differentiated in the Estella cloister capitals, it is possible to speak of a coherent and homogeneous style. Its distinguishing features are pronounced three-dimensionality, decorative richness, and varied and complex compositions. Architectural miniatures (real or allegorical) are found on some capitals; they belong to the many peculiarities of this cycle of capitals. The figures are relatively stylized, but their postures are varied. The sculpting of dress and drapery folds is rather schematic.
The style of the capitals has been connected with that of the cloister of Pamplona and that of the façade of Santiago de Puente la Reina. Stylistic affinities with Silos and with some aspects of Castilian Romanesque sculpture have also been pointed out. In Estella itself there is a more direct connection with the nearby royal palace of Navarre, where the sculptor Martín de Logroño was active. The capital he created for the façade of the Palacio de los Reyes de Navarra with the representation of the contest between the knights Roland and Ferragut also forms a parallel for the capitals in the cloister of Estella. Nonetheless, these capitals seem to bear the ‘signature’ of another artist. Whoever the sculptors of San Pedro de la Rúan were, they can be credited with creating one of the most magnificent cloisters of the second half of the 12th century.

Photographic plan and naming of the capitals
All capitals are depicted from four sides (North, South, West, East) or from eight sides (N, S, W, E, NW, NE, SE, SW). The abbreviations N, S, W, E follow the English names for the cardinal points of the compass North, South, West, East.
The numbering of the photographs also comprises that of Fernández-Ladreda 2012, who numbered the capitals in order of their arrangement from 1-19.
For example W04FL13:
W04 is the number of the capital and side in the cloister. FL05 is the number in Fernández-Ladreda Aguadé 2012. The final letter stands for the point of the compass, from which the capital was photographed. The name of the photo of the same capital if taken from the north-east will thus be W04FL13NE.