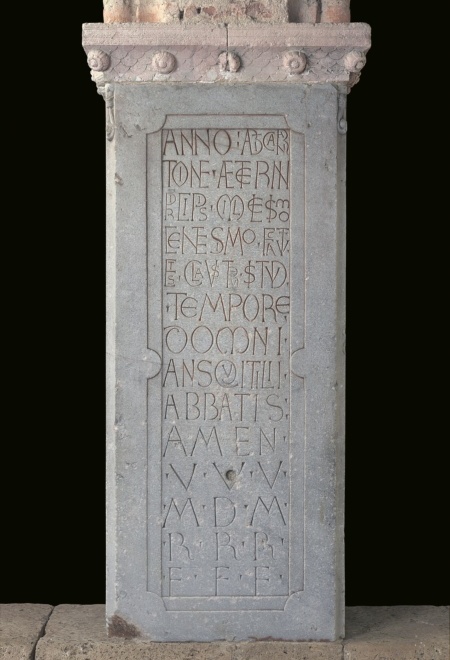 The Cloister of Moissac

The Abbey of Saint-Pierre in Moissac is one of the oldest monastic complexes in the south-west of France. The exact date of its foundation is unknown, but according to legend it was founded by the Merovingian King Clovis I (466-511). The oldest reliable documents on the Abbey date to the late 8th century, but it was the Chronicle of the Abbot of Moissac, Aymeric de Peyrac (1377-1406), dating to the late 14th century, that first represents a rich documentary source on its earlier history.
Clearly the Abbey experienced a development, typical for the region, between the 9th and the early 11th century. During this period some thirty donations enlarged the monastic estates. Some manuscripts testify, moreover, to a lively or at any rate regular religious and cultural life in Moissac during this period. The reinforcement of the feudal system and the power that went with it especially influenced the Abbey in the early 11th century: local rulers, such as the Counts of Toulouse, exchanged or sold to each other the office of military protector (abates milites) of Saint-Pierre – most likely on account of the privileges that such an office brought with it.
Presumably the chronicler preferred to draw a veil of silence over the situation of the monastery before its entry into the Benedictine Congregation of Cluny, in order to emphasize the uniqueness of the Cluniac Reform. In fact this accession to Cluny represented a crucial step for the future of the Abbey. In the middle of the 11th century the Burgundian motherhouse, which was zealously engaged in the Gregorian reform movement, appointed a former Cluniac monk, Durand de Bredons (1048-1072), as Abbot of Moissac. Durand was also Bishop of Toulouse. The Cluniacs perhaps regarded Moissac as the southern vanguard of their expansion towards Spain. Undoubtedly it was thanks to the enhanced prestige through membership of Cluny and the presence of reform-minded abbots that boosted benefactions and the “restitution of church properties” and extraordinarily increased the estates of Moissac in the second half of the 11th century. In the early 12th century the “possessions” of Moissac stretched from the mountains of Auvergne to the Spanish part of Catalonia. The great library of the abbey testified during this period to the intensive activity of the monks in its scriptorium, as well as to the high intellectual level of the monastery. A flourishing period of building activity also dates to this same golden period. A new abbey church was consecrated in 1063; it was replaced by a domed church in the 12th century, though this was never completed. According to the inscription on the middle pillar of the west wing of the cloister (WVIII), it was Abbot Ansquitil (1085-1115) who commissioned the erection of the cloister in 1100; its lavish sculptural decoration represents an astonishingly complex iconographical repertoire for this period. The portal with its famous tympanum seems to date to the early 12th century, though an earlier dating, and thus one chronologically closer to the decoration of the cloister, cannot be excluded. The affluence of the monastery was maintained in the 13th century. Thanks to the enlightened patronage of abbots in the 15th century the gothic buildings were erected. But the following period was characterized by a slow but steady decline. The introduction of the commandry heralded the secularization of the monastery in the 17th century, when the Abbey was transformed into a canonry, under commendatory abbots, though often with such distinguished abbots as Cardinal Mazarin (1602-1661). With the French Revolution, monastic life in Saint-Pierre came to an end; the abbey church was transformed into the present parish church. The cloister and the earlier abbey church were included in the first list of the historical monuments of France to be protected in 1840.