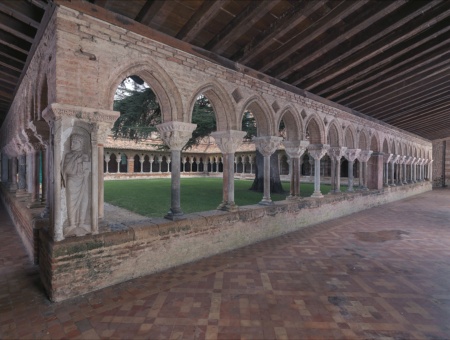 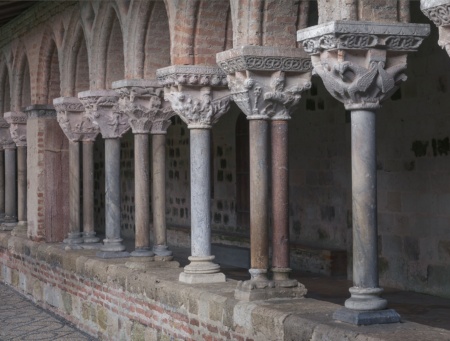 ARCHITECTURE
The cloister is placed adjacent to the north side of the nave of the abbey church; its galleries lead to several buildings: on the east side to the chapel and the chapter house; on the north side to the kitchens and refectory; on the west side presumably to the cellar storeroom. The numerous surrounding buildings have since the 11th century left visible traces on the external walls of the cloister. The well-house in the north-west corner of the inner court, which was demolished at the end of the 18th century, had a similar roof as the galleries. The cloister measures 38 x 41 m and, as Heike Hansen has shown, is slightly trapezoidal in shape. The inner court and the 4.50-to-5 m broad galleries are separated from each other by a low brick balustrade, on top of which alternately single and double columns are raised. The pillars in the corners and in the middle of each gallery consist of marble sarcophagus spolia, integrated with brick masonry. The marble columns of the cloister support pointed arcades under small square apertures. These arcades presumably date back to the period when Bertrand de Montaigut was abbot in the last third of the 13th century; during this period the previous monastery was carefully demolished and reconstructed.
SCULPTURAL DECORATION
The sculptural decoration of the cloister reveals a homogeneous programme at both the artistic and conceptual levels. Numerous stonemasons were involved in the sculpting of the capitals and reliefs. They followed a uniform canon in the structural form of the capitals. These stonemasons were clearly trained in the architectural and sculptural school developed in the basilica of Saint-Sernin in Toulouse in the period between the beginning of the erection and the vaulting of the transept. The sculptor who created the capital of the apotheosis of Saint Saturnin in the south transept of the abbey church in Toulouse was clearly the same who was responsible for numerous capitals (Sacrifice of Abraham, the Woman of Samaria) and pillars (Andrew, Philip) in Moissac. This also explains the use of motifs derived from Saint-Sernin in Moissac, such as the sideways-curling palmettes, the pairs of confronted birds, or the angels holding up a medallion. The extremely fluid iconographic transitions from one capital to another suggest that the sculptors worked together. We can assume that the execution of the decorative programme of the cloister dates to the year 1100.
The sculptures can be divided into two separate groups, each homogeneous in both stylistic and conceptual terms. The apostles are represented in pairs on the corner pillars. The reliefs of Abbot Durandus and the inscription of Ansquitil are found on the pillars at the centre of the galleries, on the east-west axis, while the well-pattern pillar is placed in close proximity to the well-house on the north-south axis; here too is placed a magnificent block of red serpentine. Of the total 76 capitals in the cloister some fifty are decorated with narrative scenes. The scenes comprise the whole of human history from the Original Sin to the conquest of Jerusalem by the Crusaders. They include stories from the Old and New Testament, the Book of Revelation and the Lives of the Saints. Their grouping however follows a different logic.
ICONOGRAPHY
Numerous details of the iconography, such as the inscriptions, open or closed books, etc., point to the world of manuscripts. The images that decorate the pillars are also indebted to the art of the book. The middle pillar on the north side of the cloister acts as a kind of Incipit and announces through a water metaphor that Holy Scripture would be the subject in the sculptures of the cloister.