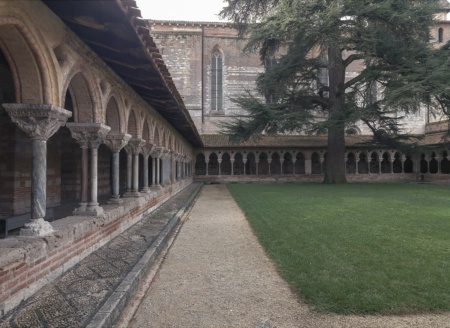 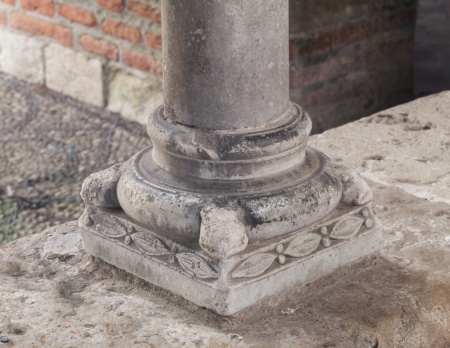 The middle pillar of the west gallery informs us of the patron (Abbot Ansquitil) and the date (1100): It represents the Colophon of the enterprise. Bishop Durandus and the Apostles are placed on the other pillars; they represent the legitimate sureties, i.e. the auctoritates, who – corresponding to the dogma of the apostolic tradition – testify to the validity of the words of the new Bible commentator Ansquitil. The Bible commentary itself is found in the capitals, which each represent an exegesis carved in stone. Exegesis means, in this sense, the Christian activity of the elucidation, in visual images, of the spiritual sense of God’s revelation in Holy Scriptures, as written down in human language. For the most part it consists of the analogies drawn between various passages from various books of the Bible. Excerpts or individual episodes from the Old Testament can therefore explain certain words or scenes from the New Testament, or vice versa.
This exegetical task is undertaken in the scenes portrayed on the capitals by details, by compositional devices and in many cases by individual figures that are not explicitly mentioned in the texts, such as the angels. Thus in capital W11MS67S the exaggeratedly large and centrally placed horn with the oil for the anointing of King David (1 Samuel) draws attention to itself: in Luke’s Gospel he who has “raised up a horn of salvation for us in the house of his servant David” is none other than Christ himself. Indeed this necessary “unveiling” of the deeper sense of the Gospel (visualized through the open or closed curtains), which is concealed not only in the Bible but also in nature (representations of flora and fauna), leads infallibly to Jesus. The prophets had proclaimed his advent (representations from the Old Testament); the Saints had imitated his miraculous deeds (episodes from the Lives of the Saints); he himself is at once the heart and quintessence of divine Providence; he personifies the real meaning of the sacred texts.

Photographic plan and naming of the capitals
All capitals are depicted from four sides (North, South, West, East) or from eight sides (N, S, W, E, NW, NE, SE, SW). The abbreviations N, S, W, E follow the English names for the cardinal points of the compass North, South, West, East.
The numbering of the photographs also comprises that of Meyer Schapiro: «The romanesque sculpture of Moissac», in: The Art Bulletin, 13.1931, 3, 249-350.
e.g. N16MS54S:
N16 refers to the separate numbering according to the cardinal point of each of the four wings of the cloister.
MS54 refers to the numbering of Meyer Schapiro, 1931.
The final letter S stands for the point of the compass (South), from which the capital was photographed. The name of the photo of the same capital if taken from the north will thus be N16MS54N.