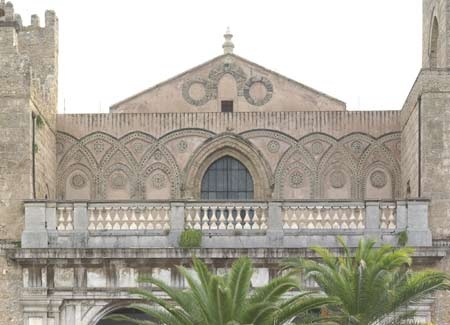 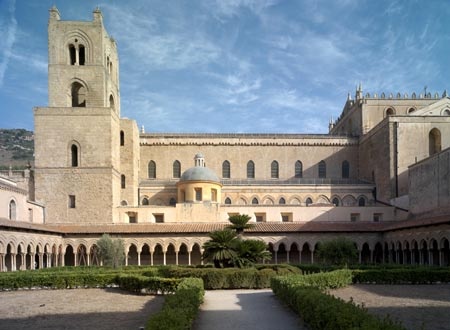 The cathedral in Monreale, dedicated to the Virgin, witnessed the coronation and marriage of William II and served as the burial site for Sicily’s Norman rulers. Although it was a monumental project in terms of both architecture and decorations, subsequent donations and privileges swiftly made this monastic community one of the wealthiest in the Norman kingdom.
Documentary evidence dates the royal construction project to 1174, although initiatives in planning and preparation can be projected back to the death of King William I in 1166. Early documentary sources include the subordination and transfer in 1174 of the property from the cloister of Santa Maria di Maniace in the diocese of Messina, and a bull of Pope Alexander III confirming this transaction. Another bull confers privileges on the royal cloister’s abbot, which placed him directly under the authority of the pope, permitted him to wear the bishop’s insignia, and allowed him to convene synods. From these documents it is clear that construction was already underway in 1174. On January 15, 1175, moreover, the pope confirmed these privileges with a new bull, although this time with an amendment conferring on William II, as king, the right to confirm or reject the election of the abbot. Monks from Santa Trinità di Cava dei Tirreni, a Cluniac abbey north of Salerno, were summoned in the spring of 1175. Subsequently, about one hundred monks, led by the future abbot of Monreale, Fra Theobaldus, arrived a year later on March 20/21, 1176. The two monasteries maintained their relationship from that point on, and the visit of a delegation from Cava in 1177/1178 appears to be further indication that the construction of the church and cloister was likely already completed by that time. On August 15, 1176, the feast of the Assumption of the Virgin, the church was dedicated “Virgo Dei Genetrix Maria.”
The accounts of King William II’s marriage to the eleven-year-old Joanna of England on February 13, 1177 in the chapel of the royal palace in Palermo suggest that the festivities took place in the Cappella Palatina. Archbishop of Salerno, Romould Guarna, reported, however, that large crowds arrived to witness the marriage and coronation, which would be inconsistent with the relatively small interior of the Cappella Palatina in Palermo. It is, therefore, much more likely that both the marriage and the coronation took place in the cathedral in Monreale. In the marriage certificate the recently elected abbot Theobaldus of Monreale describes himself as “Ego theobalduns episcopus, abbas regalis monsterii Sanctae Maria Nove.”
Already one of the wealthiest monasteries in the Norman kingdom by the time of the marriage in 1177, it now stood as the burial site of the Norman kings as well. Already in 1174 William II had transferred to Monreale the mortal remains of his father, King William I. He did the same with those of his brother and, in 1183, also interred his mother, Margaret of Navarre.
Pope Lucius III eventually elevated Monreale officially to the status of cathedral on February 5, 1183 and named the new archbishopric “Mons regalis.” Another date is provided by the delivery, in 1185, of bronze doors from Trani and Pisa for the cathedral’s entrance, which indicates the terminus ante quem for the building’s completion.
Based on the preceding evidence, especially the arrival of the bronze doors, and the traditional assumption that the capitals of the cloister were coterminous with those of the church, the cloister sculptural program would have been finished in an incredibly few short years.