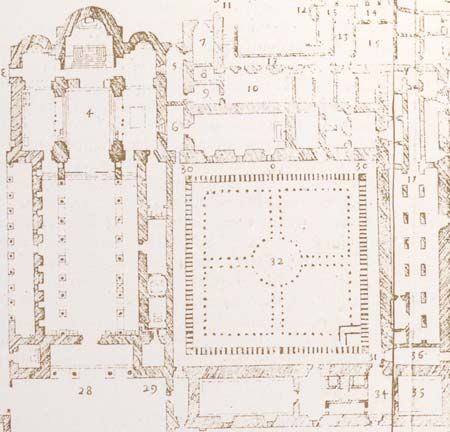 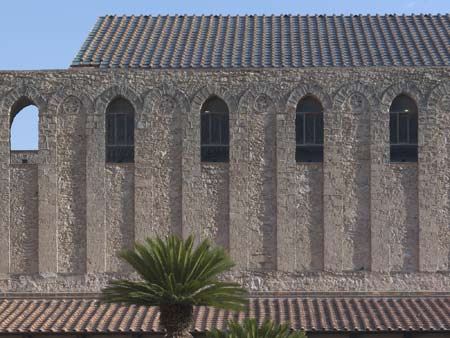 Of the former Benedictine monastery complex and the affiliated royal palace, only the cloister remains intact today, situated next to the cathedral and a few associated ruins. It is attached to the south side of the church and derives its measurements (47 x 47 meters) from the length of the nave. Each of the square cloister’s four sides consists of arcades with pointed arches whose double columns stand on a low support wall (68 cm) that is periodically cut away to form entranceways. At the southwest corner of the complex stands a fountain-house; its center marked by a column that performs the function of the fountain. The chapter house was originally located on the east side of the cloister, the dormitory on the south side, and the refectory on the west. The severe rhythm of the cloister arcade is softened in so far as the column shafts are either decorated with relief sculpture (as in the case of the corner columns), inlaid with colored stones, or else alternately plain. Each gallery contains 26 double columns and has a cluster of four relief columns at each corner.
Double bases rest on a common plinth and support the twin columns, which correspond to the way columns themselves are crowned with monolithic double capitals, the latter being capped by a single impost block that unites them. It should be noticed as well that the lower section of the capitals is for the most part wrapped in a decorative fringe of acanthus or leaves, which serve as a base or background for the carved figures. Consequently, the capitals’ basic form varies little and usually takes the form of an inverted cone, exhibiting elements of either Corinthian or composite styles.
The cloister’s regular decorative scheme stands in contrast to the richness and variation of its sculptural ornamentation. Of the 104 double capitals and 5 quadruple capitals, 15 are historiated and depict biblical subjects, with a preference for the New Testament over the Old. Representational schemes that are common to cloisters in general include the apostles, stories from the infancy of Christ, the Resurrection, John the Baptist, and the parable of Lazarus. From the Old Testament, common narratives include episodes from Adam and Eve, Noah, and the stories of Jacob, Joseph, and Samson.
Apart from ornamental foliated capitals, there are numerous figurative capitals of profane or mythological character that depict allegories, hagiographies, the dedication of the cathedral to Maria, and the Christ Child. On the whole, the individual scenes do not seem to comprise a unified program. Rather, they confine themselves to each set of double or quadruple capitals without establishing any direct connections across adjacent columns.
With respect to the figurative and narrative scenes in particular, the decoration is clearly not limited to the capital itself, but often breaks through the level of the abacus and projects into the impost block. Both abacus and impost block are occasionally inscribed with explanatory inscriptions, arabesques or smaller figures. Nor is the figurative or narrative decoration confined to one of the twin capitals; instead it frequently extends itself - especially in the case of narrative scenes - across both capitals, thereby binding the double columns into a single organized unit.