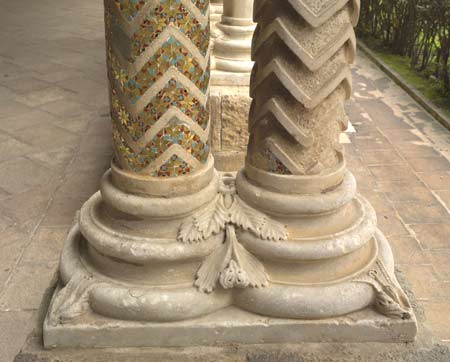 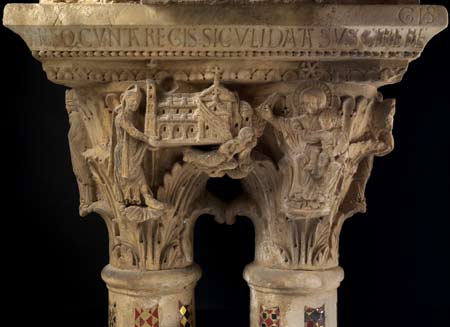 The authorship of highly-experienced stone cutters and artists can be seen in the deeply carved and the extensive deployment of elements in high relief, in the slender figures and exacting attention paid to the details of their clothing and facial expressions, in the rich variation of bodily movement in lively scenes, and not least in the masterful use of the running drill.
Different workshops likely hailed from southern as well as northern Italy and southern France. Some of them owed their artistic language to classicizing and Byzantine production of ivories and mosaics. This stylistic variety, however, is subordinate to the clear spatial logic of the cloister’s pre-existing proportions. The capitals were carved from white marble, but over time has acquired a thick, sandstone patina that covers them almost entirely, which only becomes apparent in places that have been cleaned in successive restorations or have suffered damage by chipping. Material nalysis reveals that the stone is likely parian marble from Greece, which was readily available from numerous ancient Greek ruins in Sicily.

The Cloister of Monreale – Imaging Plan and Reproduction of the Capitals
All capitals were photographed from four sides
(north, south, west, east).
31 capitals were photographed from eight sides (N, S, W, E, NW, NE, SE, SW). The symbols N, S, W, E stand for the directions north, south, west, east.
The images were sequentially ordered according to the numbering of Salvini 1962 and Sheppard 1949.

E.g., N8Sh7N
N8 is the number in Salvini 1962, who numbered each side of the cloister from 1-26.
Sh7 is the number in Sheppard 1949, who numbered the capitals in order of their arrangement from 1-100. He indicated the corner capitals with their directions, e.g., NE for northeast.
The capitals around the well in the southwest are denoted with L, e.g., L1, L2, etc. N stands for the side (north) from which the capital was photographed. If it had been photographed from the south, for example, the number would be N8Sh7S.