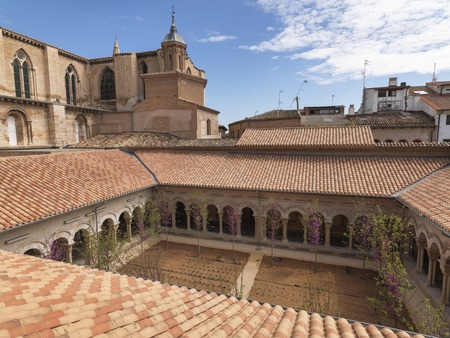 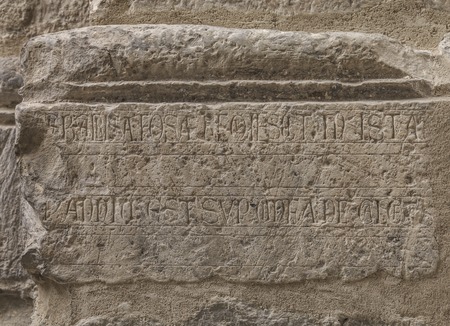 Erected in the second half of the 12th century, the cloister of Santa María in Tudela comprises one of the largest and most ambitious cycles of sculpted capitals in the Iberian peninsula. The cloister – in spite of its 12 destroyed capitals, now substituted with a smooth undecorated bowl – can boast, as no other, of the largest number of historiated capitals; of the total 64 capitals over 43 are narrative in kind. The cycle owes its style and its peculiarities to the fertile artistic environment of the period around 1170, when many major projects were being developed in which the new Romanesque architectural forms were combined with sculptural innovations.
After the conquest of the Arab city of Tutila in 1119, and following Christian expansion through the Ebro valley, the main mosque in the town was demolished and a Christian church built over its foundations. From 1121 the complex was directly linked to the monarchy, since the church was declared a royal chapel. It enjoyed particular protection through several high-ranking members of the community who were chaplains of the sovereign, notaries or scribes of the royal chancery. Although the canonical, non-episcopal Augustinians were politically subject to the kingdom of Navarre, the monastery of Tudela was dependent, after 1143, on the bishopric of Tarazona, which had been absorbed into the political sphere of Aragon.
Architecture
The exact building history of the cloister is largely unknown, but presumably reconciliation between council and bishopric led in 1156 to a more peaceful atmosphere, thanks to which conflicts were put to one side and an atmosphere conducive to artistic enterprises created. Into this period fall several documented donations and purchases of real estate to the enrichment of the monastery. Under King Sancho VI of Navarre, called the Wise (1150-1193), the choir of the church with five apses, the cloister and the perimeter walls were built. A re-examination of the written sources, and of the building fabric itself, suggests a date before 1188 (when the high altar was consecrated). This terminus ante quem can also be presumed for the “Virgen Blanca” in the choir. To the sculptors of this polychrome stone statue of the Virgin Mary, almost two metres high, can also be attributed the capitals of the cloister.
A document that mentions the operi claustri novi has hitherto been considered a proof that building work on the cloister began in 1186. But presumably by this time the wings of the cloister and the capitals had already been completed. In fact a funerary inscription of 1174 on the north wall of the cloister, opposite the capital with the Raising of Lazarus (N10PP09), suggests an earlier period for the completion of the cloister. The building in Tudela was erected concurrently with the cathedral in Zaragoza [Saragossa], capital of Aragon which had conquered Tudela shortly before. The erection of that cathedral is documented by many written sources, and from this evidence a building period in the early 1170s can be inferred for Tudela.

In addition it should be borne in mind that the community of Tudela was secularized at a relatively early date (1238). The monumental dimensions of the existing complex at Tudela (a national monument since 1884) can be explained by the significance assumed by the city in which King Sancho VI brought together Jewish, Christian and Moslem intellectuals or translators (vying with the “Toledo school of translators”) to form a flourishing cultural circle. Sancho VI was the brother of Margaret of Navarre, Queen Regent of Sicily and mother of the Norman King William II, under whom the cathedral and monastic complex of Monreale were built.