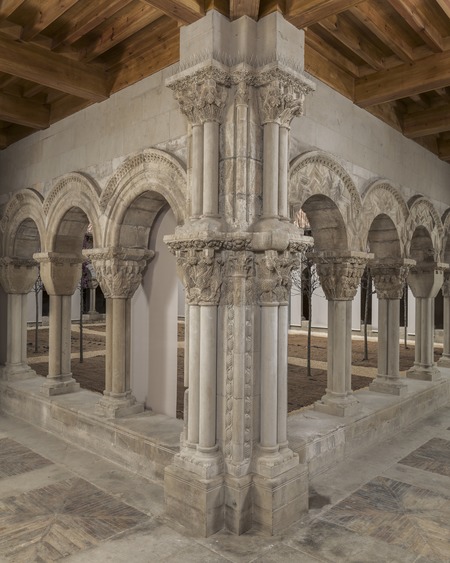 Another monument attributable to the same period in which the cloister was created is the main portal of the south transept of the church with historicizing capitals (so-called Puerta del portal or Puerta de la Virgen); its erection in 1173 is documented. The style of the sculptural decoration of the portal, dedicated to the Apostles, is similar to that of the capitals in the cloister. It precedes the west portal, the Puerta del Juicio, with its representation of the Last Judgement, which can be dated to the early years of the 13th century.

Cloister
The unusual situation of the cloister, which does not abut directly onto the south side of the church, but is somewhat removed from it, as well as its irregular measurements (18 x 24 meters), can no doubt be explained by the layout of the mosque that previously occupied the site. In spite of the reforms of the 14th and 15th century and the lack of excavations and detailed studies, which would help elucidate the spatial transformation of the site, the Romanesque remains, the archival documentation or the architectural sculptures, the essential layout of the main monastic buildings is clear. The dormitorium was probably situated to the north (though another location has been proposed in previous research). To the east lay the chapter house and the “monastic school”; to the south the refectory; and to the west the storerooms and other ancillary buildings.
During restoration work some parts of the pedestal wall, on which twelve arcades rested on the longer sides, nine on the others, were renovated. The arches themselves are decorated with chevron ornament in the north and south wings, and with geometrical bands of diamond or lozenge mouldings in the east and west wings. The original passages into the inner garden can no longer be reconstructed. All that now exists is an interruption of the wall on the north side, though passages can also be recognized on the south side in old ground-plans. The regular rows of arcades were interrupted at the centre of each wing of the cloister by a pillar with two flanking pairs of colonnettes. At the corners of the cloister two further paired colonnettes are attached to a bundled pillar. A further pair of colonnettes is placed over three of the corners of the cloister; their capitals are placed over the apex of the arcades. Only on the south-east corner are two large reliefs (Maiestas Domini and Ascension of Christ) found instead of this peculiar construction
The system of support with alternating double and triple colonnettes, each topped by a single capital, is unparalleled. This originality is consistent with other peculiarities of the cloister and with the innovative features of Spanish Romanesque architecture and architectural sculpture as developed in the period around 1160-1180.

Pictorial language and iconography
The iconographic programme of the capitals is homogeneous and coherent. The narrative cycles of Christmas, Lent, Easter and Saints articulate the constant presence of Christ. On the north side the scenes represented are especially those that illustrate the story of the life of Christ from his infancy to his public life, passion, death and resurrection. On the east side the narrative scenes concentrate on the apostolate and the life of the community. Supplementing these, moralizing scenes (hagiographical cycles and parables) are mainly represented in the south and west wings.