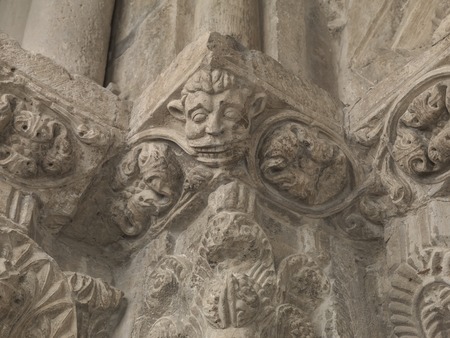 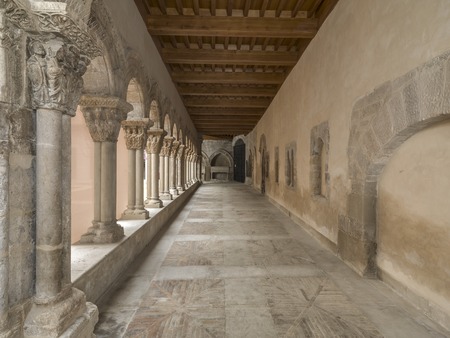 On the west side the sculptures also include a large repertoire of fabulous creatures and representations of animals such as lions, unicorns, eagles, cocks, harpies, boars, rabbits and dogs, often combined with plant motifs. The impost blocks above the capitals are ornamented with geometrical bands of interlace, palmettes, foliations or spiral motifs, but with the exception of three heads of monstrous beings on the south-west corner, no further figurative motifs appear here.

Style
The reliefs of the capitals are markedly three-dimensional and carved deeply into the stone. In general the heads are large and oval. The figures are squat, their bodies voluminous and robust. Their draperies are lavish, and elaborate in folds.
The sculptural workshop responsible for the carving of these capitals is characterized by a coherent style. This is exemplified by the painstaking representation of details combined with an unusual ability for narrative composition, spatial settings and monumentality. The style corresponds to that of the masterpieces of Romanesque architectural sculpture in Navarre (Estella), Aragon (Zaragoza) and Castile (Soria). The extraordinary quality of the reliefs and their figurative variety help to make this cycle of capitals an outstanding artistic project of its kind. Apart from its aesthetic dimensions, it must also have had a formative role for the community in its representation of stories from the New Testament and of various exempla and parables. In particular, it must have brought home to the laity, who finally entered the cloistered sphere, the dual (human and divine) nature of Christ (as propounded at the Council of Chalcedon in 451), as also the authority of the apostles and saints who followed and imitated Christ.

Photographic plan and naming of the capitals
All capitals are depicted from four sides (North, South, West, East) or from eight sides (N, S, W, E, NW, NE, SE, SW). The abbreviations N, S, W, E follow the English names for the cardinal points of the compass North, South, West, East. The numbering of the photographs also comprises that of Patton, Pamela Anne: Pictorial narrative in the Romanesque cloister, New York 2005.
For example N06PP05: N06 is the number of the capital and side in the cloister. PP05 is the number in Patton 2005. The final letter stands for the point of the compass, from which the capital was photographed.