The Cloister of Sant’Orso in Aosta

The collegiate church in Aosta is constructed over the gravesite of its founder, Saint Ursus, and is dedicated to him along with Peter the Apostle. Dates concerning his birth in the Valle d’Aosta cannot be positively ascertained, while his death occurred either on February 1, 529 or much later, in the 7th or 8th centuries.
Archaeological research and excavations carried out in 1972 in the area of both Santi Piero e Orso and the church of San Lorenzo reveal different periods of building activity: A Roman necropolis, over which rose a simple Early Christian structure with a 5th-century apse, contains numerous tombs and wall foundations, which are located primarily in the north-eastern section of the main nave and side aisle of the present church of Sant’Orso.
The expansion of the church dates to Carolingian times and this can be reconstructed from excavations of the enclosing walls. The three-aisled church with staggered apses of the current structure corresponds almost entirely to the Romanesque church, which was begun under Bishop Anselmo (994-1025). Towards the end of the 11th or the beginning of the 12th century the crypt of the church also underwent further alterations. Monastic life at the site officially began under the first Bishop Aribertus (1132-1139), when the chapter was reformed and converted from a collegiate foundation into a community of Augustinian canons regular by Pope Innocent II in 1133 – in modern dating 1132 – and confirmed by an inscription on one of the decorated capitals in the south wing of the cloister. The inscription refers to this event and further esearch has led some to date the cloister capitals to this period. Primarily on the basis of stylistic considerations and its affinity to French cloisters, such as those in Arles, Avignon, and Provençe, on the one hand, as well as Lombard capital sculpture and re-used capitals from the baptistery of Saint-Marine d’Ainay, on the other, this controversial early dating is still in dispute. As a consequence, a date after the middle of the 12th century has been proposed for the capitals, which fell within the time of Aribertus’ successor, Prior Arnolfo di Avise (1149-1159).
Subsequent alterations to the cloister were concentrated primarily in the 19th century and include several columns, bases, and capitals, whose position-marks testify to the reconstruction work probably carried out at this time.
Joined to the south side of the church, the cloister with a length of 19.5 m forms a rectangular enclosure and corresponds, except
for one bay, to the side aisle of the church. The width of the north-south axis measures 10.7 m so that there are necessarily fewer columns on its two sides.

The north and south wings of the cloister bear thirteen single capitals between the massive corner piers. In the west wing four paired capitals extend in a similar manner between the corner pillars and a centrally placed pier alternating with two single capitals, while the east wing is currently adorned with three capitals decorated with vegetal motifs; although these were not carved at the same time as the other cloister capitals. Since 1887 the original capitals have been conserved in the Museo Civico d’Arte Antica in Turin. In 1997 one of the double captals from the west wing of the cloister was destroyed by vandalism and has now been replaced with a copy. The capitals are carved from white marble but were, however, already covered with a black coating in the second quarter of the 17th century – which has prevented the damage naturally caused from dampness seeping into the stone. As a result, except for some fractures, the capitals have been relatively well preserved along with their many inscriptions.
The majority of the capitals of Sant’Orso are either decorated with figures or narrative scenes. The historiated capitals can be assigned, except for a few exceptions, to a corinthian capital type. The abacus is formed by a centrally aligned protruding and stylized abacus flower, while the capital itself swells out in a convex manner at the corners in a similar manner so that its form resembles the shape resembles a scalloped capital. The figures and scenes adapt themselves to the shape of the calathos and therefore are set in front of it. The narrative scenes are distributed irregularly on the calathos so that the narrative style is continuous and composed primarily of single scenes. The single figure exhibits a more representative character so that it behaves, for the most part, as an isolated central figure not immediately interacting with others in the narrative.
The base of the figures always projects from the astragal of the capital, which is deeply incised, in order to furnish sufficient spatial depth. The calathos remains hidden behind the figures or leaves and is only occasionally visible in the lower part of the capital and it merges with the floral decoration of the capital and the abacus.
The five capitals with the representations of the prophets on the south side of the cloister also follow this principle and create, moreover, a homogeneous unity in which they follow a formal procedure of representation with regard to content. On all four capital sides the busts of the prophets are placed in front of the calathos, as clipei, with scrolls in hand.
The historiated capitals thematise both Old Testament stories (Abraham, Daniel, Nebuchadnesser, Job, Jacob), as well as New Testament ones (Christ’s infancy, Lazarus), as well as hagiographic representations such as the life and miracles of Saint Ursus, the patron and founder of the Abbey.
With the typical variety for a cloister of this period and the proximity of narrative, figurative, and ornamental capital decoration, several motifs – for example, in the Prophet capitals – repeat themselves over and over in the details and, therefore, they distinctly determine the overall image of the cloister itself. The holes drilled to create a decorative pattern in the representation of textiles - such as in the curtain in capital N3B4 (the Nativity) and capital W1EB16 (the Birth of Jacob and Essau) or the blanket in capital N5B6 (Joseph’s Dream), for example, appear almost stereotyped. Also, the use of one and the same figural type for the Three Wise Men on capital N4B5, who all hold their gifts with the same gesture, while bending their left leg, show little artistic variability of movement in the figural motifs.

The cloister of Sant’Orso in Aosta belongs, along with the cloisters in Monreale and Cefalù, to the few cloisters in Italy that display such an extensive capital programme with narrative and figural representations in comparison to the surviving examples in France or Spain. Not only topographically, but also in chronological respects can Aosta be studied as a connecting link between southern French and Sicilian capital sculpture, though without implying that there is any necessary stylistic development involved.

E.g., N11B12N:
N11 is the number by the side of each gallery of the cloister. B12 is the number in Berton 1954 and Barberi 1988, who numbered the capitals in order of their arrangement from 1-37. N stands for the side (north) from which the capital was photographed. If it had been photographed from the south, for example, the number would be N1112S. 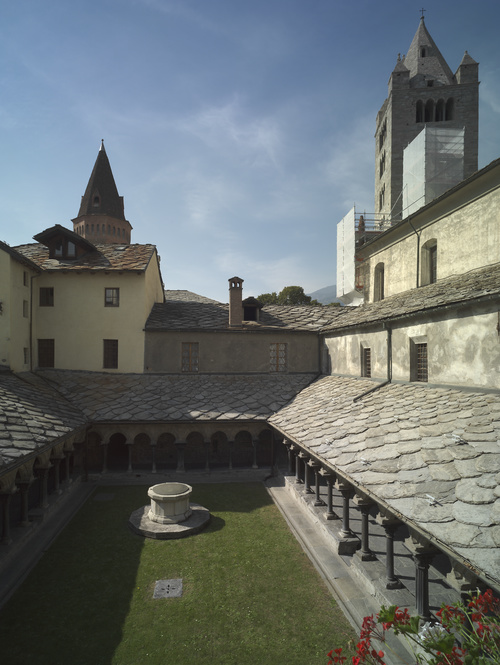 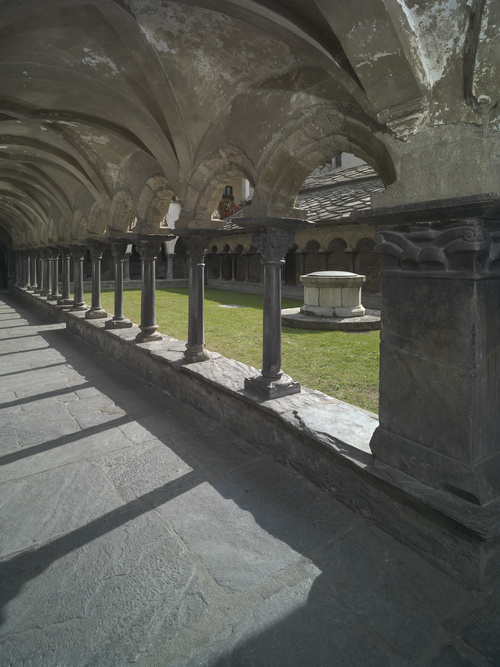 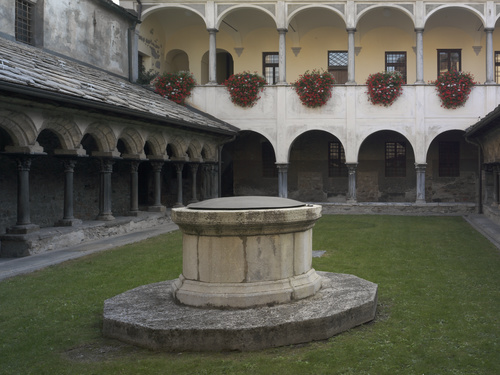 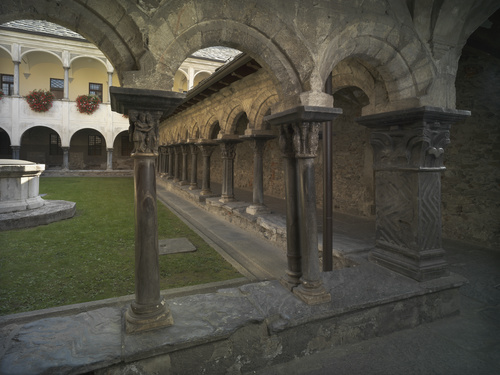 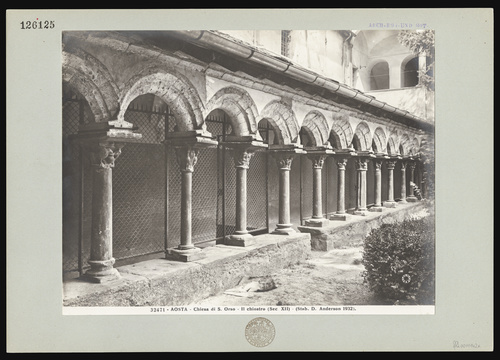 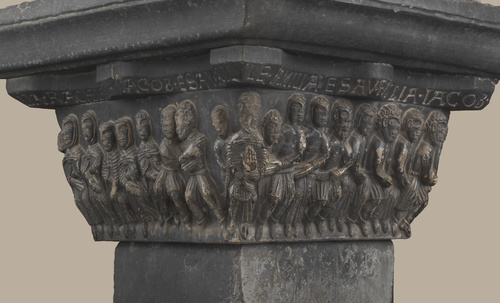