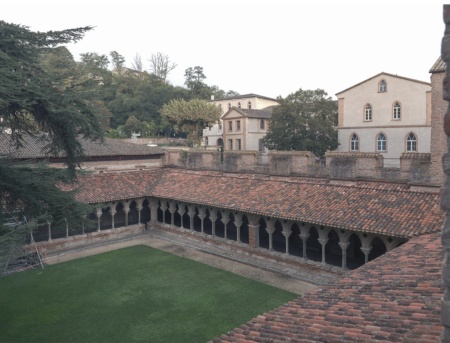 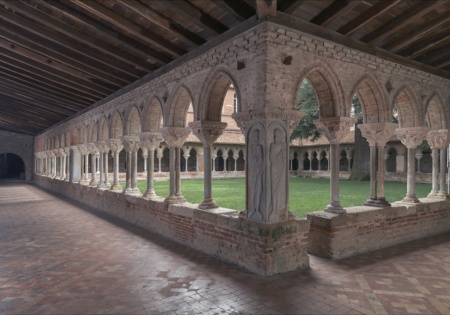 Romanesque cloister capitals in the Mediterranean and the Cloister in Moissac

The cloister of the abbey church of Saint-Pierre in Moissac can be regarded as the building that initiated the great Romanesque cycles of historiated cloister capitals. As testified by the inscription on the pillar in the middle of its west side, this abbey, endowed with rich estates and an important monastic library, erected a cloister under Abbot Ansquitil in the year 1100. On all four sides of the cloister double colonnettes alternate with single ones. Their capitals are preponderantly carved with narrative scenes. In his dissertation “The Romanesque Sculpture of Moissac” of 1929/31 Meyer Schapiro describes these capitals as historiated capitals and thus coined the term by which this particular form of capital is now generally known.
Each of their individual sides forms a spatial unity, a separate narrative episode. Each is framed above – rather like a proscenium arch – with helices, a pronouncedly concave abacus and a centrally placed console block. A powerful impost block with bevelled edges, usually decorated with figures, animals, foliations, flowers, or characters, is placed over the calathus and thus completes the overall trapezoidal shape of the capital.

In this part of the CENOBIUM project the KHI-MPI has collaborated with two French art historians, Quitterie Cazes and Chantal Fraïsse, who together wrote the texts for the individual capitals and the description of the cloister as a whole.