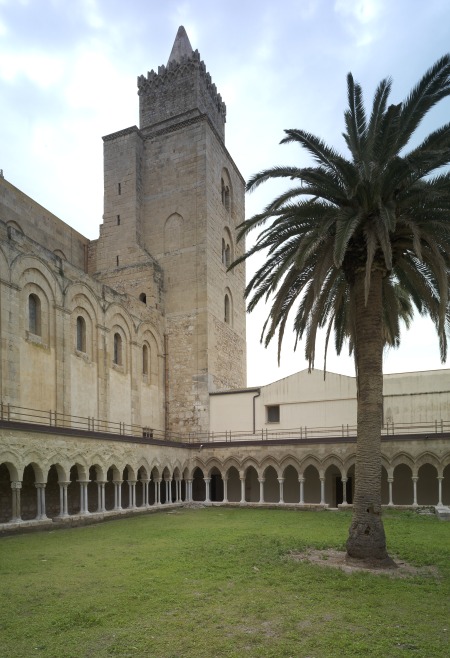 Romanesque cloister capitals in the Mediterranean and the Cloister in Cefalù

The cloister of the Cathedral of San Salvatore in Cefalù, built between 1131/1166 or 1170/1180, was commissioned by the Norman king Roger II. It is considered an important precedent for South Italian sculpture, and especially for that of Monreale. The cloister underwent drastic architectural alterations as a result of building work round it in the sixteenth century. It was also seriously damaged by the fire in the east gallery in the early nineteenth century. After the restoration of the south and west ambulatories had been completed in 2004, the cloister was once again made accessible and now presents 28 paired colonnettes with double capitals, as well as four bundled colonnettes on three of the four corners. The rest of the capitals and colonnettes are currently in store. The capitals are preponderantly decorated with foliations and scrolled tendrils, or are of corinthianizing type. The figurative capitals show such motifs as acrobats, deer, monkeys, eagles or harpies and other fantastic beasts. The two historiated capitals have been transferred to the south ambulatory of the cloister. Their reliefs tell the stories respectively of Adam and Eve and Noah’s Ark.